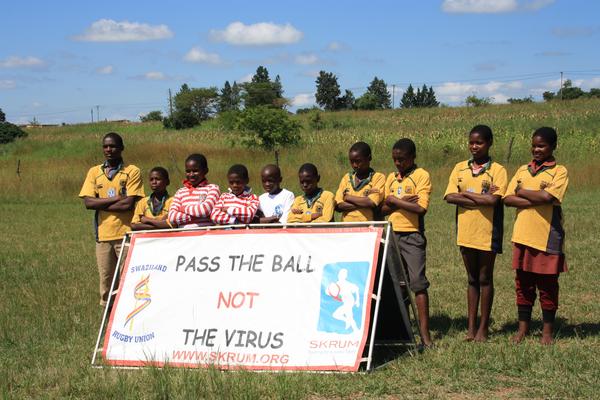 Heres what they had to say about us…
“SKRUM- A charity that uses rugby to help fight HIV in Swaziland has won the Rhino Grassroots Rugby Award for demonstrating unparalleled community spirit.
SKRUM was set up by Doncaster-born Swaziland Rugby president Michael Collinson in 2007. It mixes rugby training sessions with HIV education lessons, aimed at preventing the spread of the virus in a country with the world’s highest infection rate – 28.8% of the population have HIV, roughly 345,000 people.

With just three full-time coaches, SKRUM holds eight coaches sessions at schools across the southern Africa country every week. With the tagline, ‘Pass the Ball, Not the Virus’, the charity has already reached 600 of Swaziland’s 800 schools and even coached groups as large as 1,000 children at a time.

Reg Clark, Rhino CEO, said: “Michael Collinson is a truly inspirational figure and the amount of good he has done in Swaziland and beyond through the game of rugby is amazing. We have never had a more worthy winner of the Rhino Rugby Grassroots Award.”

Michael Collinson, Founder of SKRUM, said: “We were amazed and honoured to be shortlisted for the Rhino Grassroots Award, so it is unbelievable to have actually won. This is a proud moment for SKRUM and the award is for everyone who has been involved with the charity from our coaches and volunteers to our trustees and supporters.

“For 10 years SKRUM has been offering grassroots rugby sessions to the youth of Swaziland as a way of delivering HIV/AIDS education. Not only are we now seeing infection rates starting to fall, in addition rugby is one of the fastest growing sports in Swaziland.

“It is wonderful that Rhino have recognised our work with this award – we know the competition was fierce as there are some incredible projects being run around the world.

“A huge thank you to everyone involved and for your belief in SKRUM.”