SKRUM has launched a new logo for the Umbhoco weNgabisa / Rugby just for Women project offering school girls training sessions focussing on female empowerment, health and personal hygiene. Alongside the classroom sessions SKRUM holds basic rugby coaching sessions for girls, reinforcing the gender equality message and encouraging them to play rugby without being intimidated by boys.

The programme is supported by the World Rugby’s Spirit of Rugby Award and SKRUM coaches will run workshops aimed at raising the number of female rugby trainers in schools in Eswatini and playing in communities across the Kingdom. 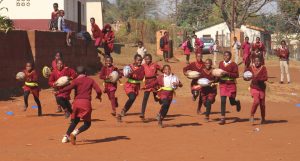